The car keeps burning out alternators; how to fix it?

Several things could cause the alternators in your car to malfunction. See whether any of these common reasons for defective alternators relate to your circumstance by reviewing the list below: 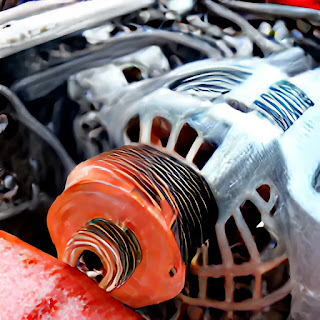 There is a chance that oil will leak into the alternator, which will hasten the alternator's internal bearings' wear. You might anticipate that your alternator will operate differently than it is due to this common problem. You might have to keep replacing the alternators in your automobile until the oil leak in your car can be rectified.

2. Excessive electricity use brought on by extra accessories

The alternator will become overworked due to the greater load or energy being applied, and if it cannot generate enough power, your car will have issues.

3. A faulty or broken battery

A defective battery can completely destroy an alternator, particularly if one of the battery's cells is leaky or otherwise damaged. Your car's battery has to be inspected by a qualified and experienced mechanic to see whether it needs to be changed because of any damage.

4. Inappropriate use of your alternator or avoiding it:

An inoperable alternator can also frequently be brought on by car wiring issues. It would help if you inspected the wire to see whether it is hot or a short exists. By connecting a voltmeter to the wire, you may test it to check if it provides an accurate reading.

This is why you will be forced to continually bring your car in for alternator repairs until you can locate a qualified auto mechanic or automotive engineer to handle the work properly.

Does a dead car battery have a chance of ruining the alternator?

Your car's alternator could become damaged if your battery isn't working properly. The most frequent cause of an alternator to malfunction is a dead battery. Several elements, including inadequate charging, the battery's old age, or the fact that it was emptied, could have contributed to its demise.

This situation can cause the alternator to overheat and stop working. However, a few things may be done to stop anything similar from happening.

You can check whether there is an electrical charge on the battery terminals when your car's engine is running to see if your battery is performing properly.

If it does, there is probably a problem with the alternator or another part of the system; in that case, a competent mechanic must inspect both parts.

A failing automobile battery may result in various issues, including costly repairs and long-lasting damage. Make sure your car is properly maintained. Before buying new batteries, regularly see a certified auto mechanic or a business specializing in auto repairs to avoid these problems.

What does it signify if your car's alternator fully burns out?

Following are a few of the red flags:

Some vehicles can turn on a warning light if the battery experiences a malfunction. It functions similarly to the indicator that turns on when the fuel in your tank is low and can let you know if the battery needs to be replaced.

If your headlights are dim or flicker while driving at night, it may be a sign that your car needs to generate more of the electrical energy required to provide bright light for your headlights. Your headlights will need to be replaced if this is the case.

They were driving while hearing a grinding sound from the hood could indicate that the alternator's bearings were becoming loose. The serpentine belt may be worn out if you hear a squealing noise, meaning less traction would be generated to drive the alternator.

If, while en route to the grocery store, your car suddenly comes to a stop, leaving you puzzled as to

The battery is the first thing that comes to mind as you try to start your automobile, and all you hear is rapid clicking, and it won't start unless you jump-start it. But if you replace the battery and the vehicle won't start, you must replace the alternator.

Failure of one or more of your numerous accessories, such as the air conditioner's fan not cooling the air sufficiently, your radio turning on and off by itself, or your power windows moving very slowly, is a sign that the alternator needs to be inspected.