The History of Karl Friedrich Benz

Karl Friedrich Benz was a German inventor and car manufacturer who is widely regarded as the inventor of the modern automobile. He was born in Mühlburg, in present-day Baden-Württemberg, Germany, on November 25, 1844.

Benz attended the Karlsruhe Polytechnic Institute where he studied mechanical engineering and graduated in 1864. He then worked as a designer and draftsman in a machine shop in Mannheim. In 1871, Benz was granted his first patent, a two-stroke gas engine. He followed this up with a host of other inventions and patents, most notably the first practical four-stroke gasoline engine in 1878.

In 1886, Benz founded the Benz & Cie. company and began producing automobiles. This was the first company to produce cars for sale on a large scale. The so-called Benz Patent-Motorwagen was the first car to be powered solely by a gasoline engine and is considered to be the first modern automobile.

Benz continued to innovate and patent new ideas for automobiles, including the first four-cylinder car engine and the first car to be equipped with shock absorbers. In 1926, he merged his company with Daimler-Motoren-Gesellschaft to form Daimler-Benz AG, now known as Daimler AG.

Karl Friedrich Benz was a pioneer in automotive engineering and his work laid the foundation for modern cars. In 1886, he was awarded the Grand Cross of the Order of Merit of Baden and in 1929 was inducted into the Automotive Hall of Fame in Detroit, Michigan. He died in his home in Ladenburg, Germany, on April 4, 1929.

A shining, magnificent, royal car with its luster shining on the light, with the three-pointed star logo, making an entry on the road is one of the most beautiful moments your eyes can capture. Yes, it is the Mercedes Benz. The car has had a long time immemorial since its founding in 1885 by the legendary engineer Karl Friedrich Benz, thus being the first automobile put into series production. Hearing of the same is giving you goosebumps. Then there is a lot more to come. Let’s read about the history of Karl Friedrich Benz and his journey. 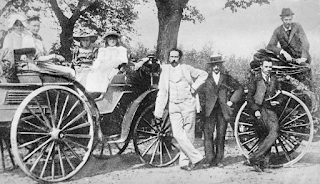 On November 25, 1844, Karl Benz was born as Karl Friedrich Michael Vaillant to Johann Georg Benz and Josephine Vaillant. Little Karl faced the first tragedy of his life when his father died due to pneumonia when he was only two years old. Days of poverty met them, but his mother was so strong-willed that she was determined to give him a good education. He attended a local school in Karlsruhe and went on to study in the Karlsruhe polytechnical school under Ferdinand Redtenbatcher.

Even though he studied locksmithing, he followed his father’s steps into locomotive engineering as fate would have determined. He attended mechanical engineering in Karlsruhe polytechnical school. Later, he worked at an iron construction company and in other various companies as a draftsman and a designer.

His factory and inventions

In 1871, Benz joined hands with August Ritter and launched a mechanical workshop. The workshop business was destroyed owing to Ritter’s unreliable attitude. Subsequently, Benz bought Ritter’s share with the help of his fiancee, Bertha Ringer. In 1872, they both married and later had five children.

After this, he concentrated on new engines and tried to get a patent. He built a two-stroke engine based on Nikolaus Otto’s four-stroke engine and gained its patent in 1879. He also licensed the speed regulation system, ignition, spark plug, battery, clutch, gear, and water radiator.

The origin of Gasmotoren Fabrik Mannheim

The banks in Mannheim asked Benz’s gas factory enterprise to be incorporated as it had high manufacturing costs. So he collaborated with Emil Buhler and his family to get the bank support to form the Gasmotoren Fabrik Mannheim in 1882. But later, Benz left the company because no one considered his opinions about new engines, and he was only given a share of 5%.

In 1883, Karl Benz, Max Rose, and Friedrich Wilhelm Eblinger gave rise to a new company producing machines for industrial applications. The company had good growth with 25 employees and began to produce gas engines.

With the company, Benz brought back his old passion for building horseless carriages. This passion leads him to make a four-stroke engine with his design. The automobile was completely built-in 1885, and he named it Benz Patent Motorwagen. It rose Benz to be the inventor of the vehicle, thereby revolutionizing the industry.

Tests were conducted, and the vehicle was patented in 1886. In the following year, he built a new automobile with changes from the latter and named it Motorwagen Model 2, and Model 3 was released in 1887.

One problem faced by customers was that gasoline availability was limited to pharmacies and therefore was not predominantly found. Also, the vehicle had to be pushed while driving over hills. It was when Barta Benz came into the arena. She steered the car and suggested to Benz the addition of extra gear. With this success, they exhibited the Model 3 at Paris World’s Fair in 1889.

Expansion of the company

As technology developed, there was a growing demand to expand the factory. In 1886, they built a new building in Waldhofstrasse. The company grew to 430 employees and produced 572 automobile units in 1899. With this expansion, Benz and Cie registered themselves as a joint-stock company, with Friedrich Von Fischer and Julius Ganb joining the board members. They suggested to Benz to create an inexpensive automobile. It led to the launch of Victoria, a two-seated car with a 3-hp engine and could travel up to a speed of 11 mph.

An improvised model named Velo was released in 1894, which became a huge success and produced 1200 units till 1901, and also made its way to the Paris to Rouen 1984 race.

1895 saw Benz designing the first truck in world history, which was also modified into buses by Netphener. In 1896, he gained a patent for the first flat engines or boxer engines and was known for their high performance.

The company had a competition with Daimler Motors. But in 1900, the leading designer of DMG built an engine in Mercedes-35hp of 1902 according to specifications given by Emil Jellinek. To counter DMG, Benz introduced the Parsifal automobile in 1903, which was equipped with two vertical cylinders and could attain 37 mph. As the other directors hired French designers without Benz’s consent, he retired from design management.

Even remaining as the director of Benz & Cie, he found a company with his son Eugen. He used another brand name.

Along with his family, Karl Benz moved to Ladenburg and established their own ‘family’ company, C.Benz Sons, which later produced petrol engines. They rose to popularity in London and were used as taxis. In 1912, he gave the company to Eugen and Richard, releasing his shares.

Benz Velo was the first to participate in a racing tournament. Investment in such competitions was returned by the sales generated owing to the fame gained through it. Thus they built special race vehicles, the most prominent being the Tropfenwagen, and were introduced to the world at the 1923 European Grand Prix. In 1923, they produced 350 units of cars.

On April 4, 1929, Karl Benz died in his home due to severe bronchial inflammation. Bertha Benz too left the world on May 5, 1944. The home is now used as a memoir for the family’s contribution to the automobile industry.

It was Karl Benz who paved the way for the invention of a commercially viable motorcar. Today, we all know that life without cars is impossible. It was Benz who revolutionized the industry with his willpower, determination, and vision. All of us will remember him forever.